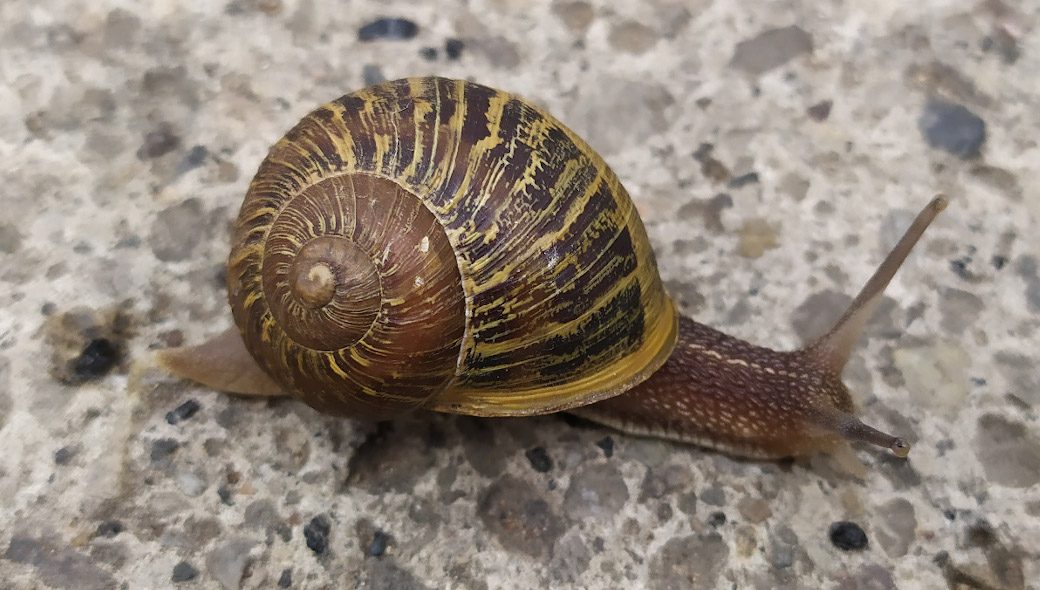 The other day, I was hurrying down the street, worried to fulfill my errands as soon as possible when I came across the most unexpected passerby which forced me to an abrupt halt. Down over the concrete floor, I found a huge snail. I knelt beside to have a better look and take a photograph of the impressive specimen. I wondered from where the snail was coming and what its destination was. Apparently, it had creep out from a tiny patch of grass at the side of the sidewalk and was sliding towards the lush garden of the house in front of me. A great new home indeed, the garden looked like a jungle compared to the tiny patch of grass.

The only problem for me was the snail was sliding too slow—for the surprise of nobody, that is the main characteristic of a snail—, but I must confess that like a devoted father, I grew worried about the snail wellbeing, considering the next passerby might not be as careful as me.

But during the moment I was pondering about yanking it away from the pavement and doing at favor by depositing it in the desired destination, a group of people walked by and I had to step aside. The group passed by unaware of the snail on the floor, and contrary to my expectation, the snail didn’t flinch back inside his shell. The snail continued his journey slowly but diligently towards his destination.

This situation made reflect on the fact that I was the one in the hurry, not the snail. The snail perfectly knew about the time that would take him to arrive to the destination and the dangers involved. The snail was not worried about the future. I was.

And that fact made me realize, that we refuse to endure the time required to make it at the end of the grocery line, the traffic jam, to complete our work shift, and we want to speed the time needed to receive the job promotion or for our new enterprise to pay the bills. Most of the times we want to rush through life, but as we approach our ultimate destination, and our mortality lurks at the horizon, suddenly we want to stop the clock. And even worse, we beg the skies for rewind time.

We are so eager to experience life that when we are doing the things we are more worried about complete them as fast as possible rather than enjoying the journey.

I remember the wise words of my teacher of second grade, “Don’t rush through life,” he used to say, “enjoy all the stages of life at the fullest,” and he was right… we rush through life so desperately that when we are children, we wish to become adults, to make money and be the owners of our decisions just to latter during adulthood, to wish we could be children again. Sadly, because most of us recognize that true happiness is surrounded by a halo of innocence and daydreaming that only infant minds can use to apply as colorful filter to life.

Today more than ever, in the era of the instant gratification granted by the internet, when we are used to receive recognition, good wishes and success in a matter of seconds to feed the insatiable monster that our self-esteem has become, we need to rewire our brains to teach ourselves to deal with the frustration of the long journeys. We need to learn to find pleasure in the sacrifice needed to make it to the goal, because the road to all good things might be long, and we want to spend that portion of our lives happy. Just like we did as children envisioning our adult lives.

Two hours after I’ve completed all my pending items, I returned to my car the same way I came, and for my surprise, the snail had completed his journey to the garden. I smiled, mentally thanking the snail for the valuable lesson: next time you are in a hurry, calm yourself down and get rid of the anxiety by breathing deeply and realizing that as long you walk in the right direction, you will make it to your goal eventually, and if you enjoy the journey, even if the prize at the end could disappoint, you would have spent most of your time being happy.