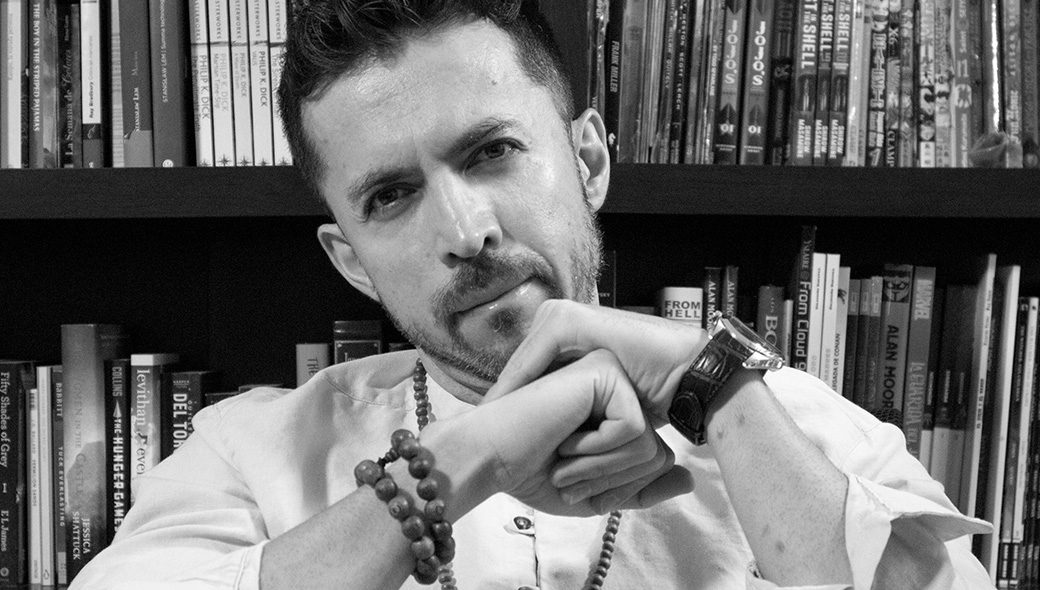 There are people who discover what they want to be as grownups in childhood. And there are others like me, who figure out just by accident. I basically bumped into the profession like you do with a stranger in a crowded street. If you would ask the child version of me, “what would you like to be when you grow up”, probably one of the last professions I would’ve picked, is to be a writer.

The earliest conscious memory I have is from when I was three-and-half years old. That day, my parents took me and my brother for a photo session. You could think that it was the photos, what acted as a memento to fixate that day in my memory, but it was the activity we made afterward. My parents took us for the first time to the movie theater.

I walked in from the hand of my mother, mouth-gaped, down the seat rows of the huge theater. My mother picked our seats, “not so close to the screen, not so close to the back of the theater,” just in the middle, as she likes. As soon as my mother seated me by her side, I propped myself up with my knees on the chair, my tiny hands clasping the backrest. My head craned around, looking to everything and everybody. I was so amazed, like an explorer who finds a treasure. But little knew, the toddler version of me, that new worlds were about to unfold before me, framed by the window created by the inert white screen and the magic of cinema.

When lights went out and film started rolling, it mesmerized me. “I want to be like him,” I shouted, pointing to the hero on the screen, as the adults around me burst in laughter.

Even without understanding how movies worked, how they are written, shot, or produced, I decided at such a young age; I wanted to be on the screen. All my eyes could see were the actors enacting the action.

From that day on, movies became my favorite hobby. And as I grew old, I understood what happens behind the camera: the function of a writer, a cameraman, a director, and a producer. My childhood dreams of becoming a movie actor started shifting. Maybe as I became conscious of my introverted personality not apt for an actor, my insecurities, and that I was drawn more into the realm of stories, I decided my place was not in front of the camera but perhaps behind.

In college, I started writing raw screenplays from the stories surging in my mind, and little by little I learned the craft of storytelling by observing the movies I liked. I shared my screenplays with friends and submitted a few to contests with good reception.

As I gained confidence in my incipient career as a screenwriter, I got a gig for adapting a life-story into a script. When I presented the first draft to the owner of the story, he made an unexpected proposal, “Why don’t you write a book with my story?” I was aware he was working with a ghostwriter in the US, but the sudden change of mind threw me out of balance.

Write a book? I wondered, unable to see myself as a novelist. Writing a script… I mean, yes… but a book? Even when both are written forms of stories, for me, both seemed so distant. I could imagine the scenes, action, and dialogs as seen through a screen. The years and years of watching films had granted me the capacity. But books were a different beast.

Becoming a writer seemed so alien, like becoming a composer, yet I gave it a try. “I’ll write a few pages and send it over,” I said, before going back home and figure it out how to write a book. After an extensive Google search about “how to write a novel”, I dared to write my prose.

Days later, I delivered the first pages of the book, almost ashamed of myself—they were horrible in my opinion. But after reading through, the patron encouraged me to continue with the rest of the book. “Why are you choosing me to write your book instead of the professional ghostwriter you previously hired?” I inquired, convinced that there was no way my writing could beat the expertise and craft of a long-time writer. “Because you write with passion,” it was his answer.

Those words spun around my head for days, wondering if there was something in me I could not see. A hidden talent, maybe. A diamond in the rough, perhaps. I knew there was a long road ahead for me to hone my writing skills enough to produce a manuscript worth reading. And I was hesitant about the path I wanted to follow. As a kid I dreamed about making films, not writing books. I enjoyed reading novels, but not as much as watching movies.

Then, I approached my predicament in the most realistic way possible. Despite having written several short films, most of my scripts were—and are still, until to this date—unproduced. Contrary to books, films are a collective endeavor. There is no such a thing as a one-man film crew. For bring a film idea into reality, you need to convince and align a group of people to buy your vision. And even when you do it, filming is expensive. Turning filmmaking specially daunting.

Finally, I dared to ask myself: if I cannot bring my stories into the screen, where will they end up? My desk’s drawer seemed like the sole plausible answer.

I refused the idea of keeping my stories hidden from the world. I wanted to make them available to people, and books started seeming like a good second home. After all, the probability for my stories being published is higher than to make it to the big screen. Every year, more books are published than films released.

The last consideration that tilted the scales toward deciding on books as a medium to pursue my creative career, was the fact that I had everything to accomplish it. I only needed a laptop with a word processor, which I had. Everything depended of me. If the book successes or fails, it will be entirely on me. This left no more room for excuses, like is often the case when you want to produce a film: “I don’t have the equipment”, “or talented actors”, “nor the resources for produce quality sets and visual effects.” In writing novels, everything resumes in just one thing: how good you are for telling a story. And I was ready to face the challenge.

Even with a resolution to my creative dilemma, and a clear path before me, I was still on square one. My writing skills were far from being the professional writer I needed to be. With no formal education on creative writing, I resorted to the only tool I had at my disposal—books. I bought and downloaded a ton of books on writing craft, and I devoured them at the same time I embarked on the odyssey of writing my first book. I wrote and wrote and wrote. And I can confirm Malcolm Gladwell’s principle that you need 10,000 hours of deliberate practice to master a skill. I’m now over the ten thousand hours dedicated to write, edit and rewrite my manuscripts, and there is still much for me to learn. More considering that if writing a book is not challenge enough, I did it in a language which is not my native.

But not everything were challenges. It turns out that my experience writing screenplays and in studying cinematic narrative paid off. Today’s novel narrative has turned away from the purple prose with a long exposition that was so successful in the past. Now, fast-paced narratives emulating movies satisfy better a growing market of people with shorter attention spans, used to the vertiginous rhythm of social media. This was so influential that many fiction writers willingly learned screenwriting to improve the pacing in their narratives.

In my writing journey, like with everything in life, some doors closed, and some others opened. The first book I wrote that brought me into the world of writing ended up shelved in my drawer. But despite the fallback, by that time, my interest in writing fiction had bloomed. Writing became my passion and publishing my stories became my goal. A goal that I’ve been pursuing for the last years and that finally this year is coming to fruition.

By fall this year, I’ll be publishing my first novel, Vandella, which is the first book in the series I’m currently working. I’ll have plenty of time ahead to speak to you about Vandella, but I didn’t want to miss the opportunity to share a little of my journey, even when for me, it’s just starting.

Life has strange ways to show us the dead ends and paths we need to follow. And in my case, even until this point, I don’t consider myself a novelist, I’m just good at novelizing the movies I play on my head.