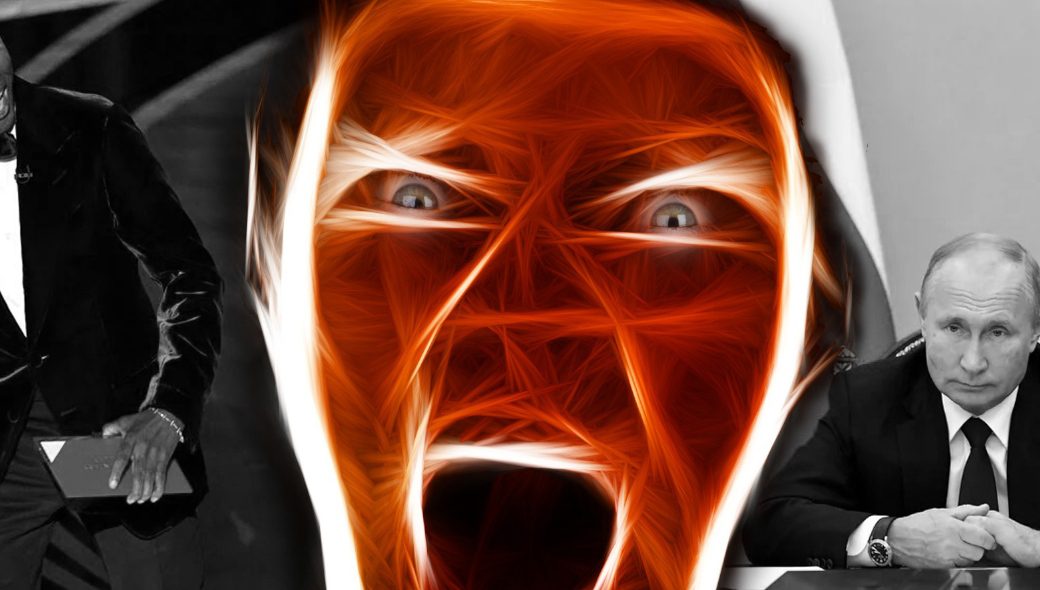 This week the internet has been flooded with memes of Will Smith slapping Chris Rock during the Oscar’s ceremony. The discussion has been split mainly between two fronts. One group who believe Will Smith’s reaction was justified because Chris Rock offended his wife, Jada Pinkett, with a joke about her medical condition, arguing a case of verbal violence it’s suffered just as physical violence in the eyes of the offended. And the second group, who argues the joke, doesn’t justify the escalation of violence. This situation might seem like superfluous and unworthy of the debate, more considering relevant news like the Russia-Ukraine war, however, as I’ve mentioned in the past in this blog, if we want to understand a society, we need to examine the extremes. And a close look will help us explain the intrinsic similarities between the two as distant as both may appear.

Anthropologically speaking, many think humans are violent by nature, believing human beings come to this world with an internal drive to harm others—or were created, like the religious belief, incarnated in the biblical story of Cain and Abel. When we analyze the different types of violence, 1) collective, like warfare or racial, 2) intrapersonal, like sexual, intimate relationship or maltreatment, or 3) intrapersonal, like self-harm or suicidal thoughts, there is always a power dynamic associated to it. From the control of resources or territories in an armed conflict, to the domination of individuals in bullying or abuse, or even to the regain the agency over their own bodies, as a coping mechanism for those experiencing trauma, the discussion always translate around the will of power to exert action in this physical world.

But power is an abstract concept, and like all actions, ends up being a physical reaction to a mental state, a concoction of feelings and sensations mixing in our brains. And here is where our two previous mentioned examples come to use:

With Will Smith, people who defend his posture argue he felt wounded by the emotional distress caused to his wife Jada, justifying his rage to assault the perpetrator of the joke as payback for the “equally violent” comment, and to ensure Jada’s future safety by preventing the event from occurring ever again.

With Vladimir Putin, he argues, he felt threatened by the continuous placement of armament by US in Ukraine’s territory (a key land buffer and strategic point for invasion in WWII), the refusal of Ukraine’s government to concede independence to the pro-Russian separatist’s states, and the fact that despite Putin’s several reports to UN about this situation, the efforts of US and NATO to adjoin Ukraine continued, putting in peril his country.

If we analyze closely, both thought processes passed through similar states of mind. The same set of emotions and sensations. From the annoyance and frustration of this situation happening to them (neither Will nor Putin reacted the same way when the comedian mocked another, or some other country was invaded, respectively), the disgust of feeling disrespected (narcissistically positioning themselves above the others, and putting before their rightfulness to be respected), to the fear of being perceived as weak by others (triggering the old paranoia of the limbic system “hunt or being hunted”), to the final materialization of the rage into a violent action which could reinstate the perception of power embodied in them (slapping a man who committed a mistake or invading a country).

Both acted selfishly, driven by their own feelings and sensations, using others as justification for their behaviors. Putin, using his motherland and future of his countrymen and Will, relying on Jada’s mental distress. Problem is, the casualties of the Russians during the short war are piling in the thousands with many millions more have been affected by the economic sanctions, and with Jada, if she felt uncomfortable and even ashamed of her medical condition, her dear husband accomplished the goal of ensuring half of world’s population is aware of her ailment…

But is there a solution to master our feelings and control the way we respond to the world? Yes, we can find the answer in philosophy and in some meditation practices.

The roman slave turned stoic philosopher Epictetus teaches us “It’s not what happens to you, but how you react to it that matters,” in the sense we can’t avoid fate, but we can change the way we confront it. He also explains, “people are not disturbed by things, but by the views they take of them,” and as I recounted with the examples, it was that perception, that subjective value judgment about the situation which derailed their thoughts toward the road of anger and retribution. Finally, Epictetus also teaches us, “any person capable of angering you becomes your master; he can anger you only when you permit yourself to be disturbed by him,” highlighting if something or someone bothers us, it’s because we are giving away that power, and we end up being accomplices.

You might say I’m speaking from the comfort of my living room, not being husband to the disrespected woman nor citizen to the country threatened by US/NATO, but when I look back at my elementary school days when I was bullied, now years later, I feel more repented of those times in which I responded with violence than those times when I didn’t respond at all, even if by doing so, I encouraged my bullies to continue… And I have a hunch, that both Will and Putin will feel the same way in a not-so-distant future.